Welcome to the community! We’re thrilled to have you with us. Take a moment to tell us about yourself and how you heard about us.

A little about me, and my interest in STEM

My name is Matt Rasband and I am a Software Engineer at Ardusat. I’ve been a long time ballooning volunteer at Edge Research Lab with the goal of learning more about how lightening is formed, as the science is young enough where a group of amateurs can make meaningful strides. This is brought me into various circles of educators and I discovered a love for learning more and sharing what I know with others.

@KCocco introduced me to Ardusat last year, and I was hooked on what we could do.

My name is Ben.N, I’ve been at Ardusat since February 2015. I am an instructional designer and the Director of Learning. I’ve been involved in learning and technology for over 15 years. I have been a teacher in high school, at an applied technology college, and as an adjunct professor at a liberal arts college where I also taught workshops for professors. I love learning new things and am happy to be part of the Ardusat Community. I’m looking forward to learning from the teachers who are using Ardusat in their classroom.

I was introduced to the Ardusat Community by my good friend and colleague Chris Hoffman.

I’m Kennedy Haught, and I’ve been a Space Science Engineering Intern at Ardusat since the beginning of June 2015. I’m a student at Morehead State University in Kentucky majoring in space science engineering, and I was first introduced to Ardusat by Bob Twiggs, who is my professor as well as the creator of the CubeSat. I loved how Ardusat was combining space and education to make learning more fun. I can’t wait to see what Ardusat will do next.

My name is Jacob Wade, I am a Space Science Engineering Intern at Ardusat since June 2, 2015. I am a senior at Morehead State University, studying Space Science Engineering. I became familiar with Ardusat through my Professor Bob Twiggs at Morehead State who is the inventor of the CubeSat. I am thrilled that Ardusat is integrating space, Cubesats, and data science tools into the classroom to start getting students interested. Also making STEM grow throughout the school districts making space technology engineering math become easy to teach at every level.

Hi to all. I’m John Kamal from Philadelphia. I am a teacher at Science Leadership Academy, a public school in Philly. I teach kids engineering and senior sciences. After studying mechanical engineering, I worked in the space program for a number of years designing interplanetary spacecraft. I then cofounded a software development and consulting firm that my partners and I grew for 25 years. We sold it a few years ago and I decided to follow a long-held passion and teach kids science and engineering.

I learned about Ardusat at an education conference where I met Kevin Cocco and started loving this idea of a little box bristling with transducers that my kids could talk to.

I’m excited to be part of the community and to start learning how to help my students learn the stuff that made me passionate about engineering all these years.

Welcome John! We’re excited to have you.

You’ve been granted the one-of-a-kind “1st Post in Community Ever” badge, and all of the rights and privileges that come with it! (Mostly bragging rights) Congratulations!

Looking forward to your input on all things Ardusat.

A little about me, and my interest in STEM

My name is Carlos Fiebig and I am a Software Engineer at Austral University in Chile. I’m mentoring a course for high schools in the area about space technologies, and of course we use the Ardusat space kit, to teach our students about sensor, satelites and all related.

Hi guys, my name is Rodrigo and i’m currently studying computer engineer at Southern University of Chile and i’m part of a group named R.E.A.L Group (Robotic & Environmental Algorithms Laboratory) and i was referred by Carlos Fiebig (@CFiebig ). As Carlos said we are doing a course about space technologies using the Ardusat Space kit. 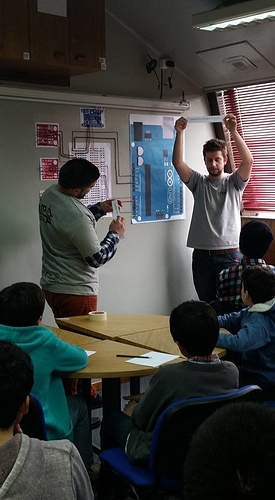 Saw you at CSTA in Sacramento!

My name is Wendy. I teach physics in Sacramento, California to high school juniors and seniors. The Ardusat looks very interesting after seeing it at the CSTA. It seems like it can have so many applications in the classroom. Looking forward to seeing more ideas on how it can be used!

HI! I stopped by your booth at the CSTA conference and then attended your presentation. I teach 8th grade Science at a school that has a Science and Technology focus and we use the space shuttle as part of our logo. I’ve been looking for something that would link our curriculum and the new NGSS standards to the theme of our school. I am really interested in ways my students can use Ardusat to show them how space can be accessible to them. We may not be able to take a field trip to space, but space can come to us through your devices. I look forward to learning more about them and to figuring out how my students will do this!
Balloon

Hi @MThorburn (Maralee)! I’m so glad you stopped by the booth and came to the presentation. We had a blast at CSTA. Feel free to reach out anytime if you want to talk about curriculum and implementation questions!

Hi @wendy! Thanks for visiting us at CSTA. I’m happy to brainstorm more ideas how this can be used in the classroom and getting your feedback on the direction we are heading. Let me know if you want to chat sometime. ben.n@ardusat.com

I’m a serious newbie to all this but very excited and jazzed to be working Ardusat into my new NGSS integrated curriculum or, at the very least, as part of my after school Electric Club. I teach 8th grade physical science but am bummed no electronics are included in the standards (hence the club).

My colleague got me into Ardusat last year. Apparently your very own Maureen was once her student (Mrs. Williams says Hi!). Of course, I don’t actually OWN one yet, but Ardusats feature in my grand plans for the near future. Your CSTA presentations seriously sealed the deal for me. Thanks guys!

I’m specifically interested in using the Ardusat sensors to validate and quantify an rocket launcher/lunar lander/egg drop project based unit for physics and astronomy. In the future I will be very interested in connecting to the satellite array and using data to have my kids study space.

Hey @MissC welcome to the community!

CSTA was a blast. Thanks for the kind words about the presentation. We can’t wait to work with you.

Best of luck on winning the space kit. If there’s anything else we can do for you in the meantime, don’t hesitate to ask.

Hi Miss C! Thanks for coming to visit us. I have been having a great time working with my old Middle School and High School in Dublin! Let me know what I can do to help get Wells and DHS ready to implement Ardusat into their curriculum. I would be happy to provide a demo for your colleagues who have not seen us yet! I look forward to chatting more in the near future!

Had a great conversation with you the other day Maralee! Looking forward to getting your students connected to Space sooner than not!
-Maureen

So glad you were able to see us as CSTA! We are always available to provide a quick demo to you and your colleagues who would like to know more. Our Learning team is always coming up with new, interesting experiments you can try in your classroom. We would also love to hear your ideas!
-Maureen