I'm new to coding, where should I start?

Don’t worry, if you choose one language and later find out it doesn’t work for your new project (say you learn Python and want to work on an Arduino), the knowledge will translate to other languages (only the syntax will likely change).

There isn’t a one size fits all solution to this question, as it really depends on what you want to do (e.g. the problem you want to solve). However, remember that the most important thing is just getting started. All the knowledge will transfer between languages and applications, so learning anything will be a great start.

I want to use an Arduino to do XYZ

Arduino uses a dialect of the C Programming Language, Adafruit provides a great place to start. Alternatively, check out the topic specific to learning arduino

I want to build websites

Almost any major language can be used for this, however the “language of the web” is JavaScript. It can be used for anything from databases to the user interface and is a fantastic language to learn first - as it requires little/no setup locally.

Complementary to JavaScript, you will eventually want to learn HTML (which is more a markup language than a programming language, and is easy to get a hold of) and CSS to control how it all looks on the webpage.

Share what kind of things you want to do, where you started, and/or what helped you get going!

Also, instead of picking a language to learn before you start, come up with the types of problems you want to solve and look into the language which covers those topics.

This handy flowchart should also help: 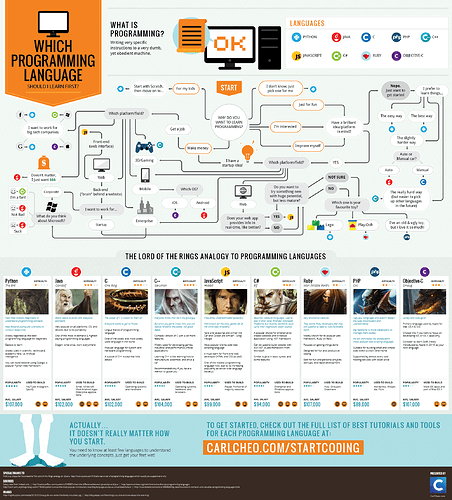